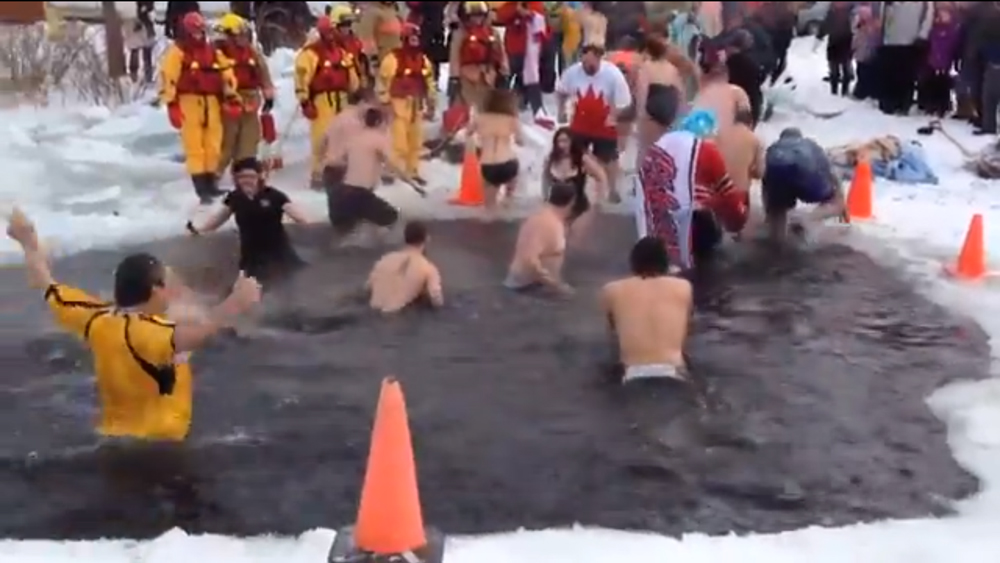 On the first morning of 2014, with the temperature hovering around -13 C, volunteers, friends, family and approximately 20 adventurous participants gathered and lined the shore of Elgin Pond for the second annual Polar Plunge to support the United Way. Among the revelers were 8 people representing family owned and operated residential garage door company Upright Door Service Inc., including Alan Fortnum and Kevin Fortnum.

Volunteers had their work cut out for them as they broke through 11″ of ice on New Year’s Eve, and another 2″ the next morning to clear an area for the brave dippers to take their plunge. Due to the frigid temperatures the water had to be stirred to prevent it from freezing over on the day of the event.

Neither the windchilll, nor the look of the icy water were enough to deter our intrepid Upright Team and the rest of the participants from taking the plunge. Spectators and volunteers wrapped in their winter woolies watched on, pledges were collected, and exuberant cheers were heard as the eager group submersed themselves and splashed around in the icy water.

Warm towels and blankets greeted the participants as they climbed back out and they were taken to the UxPool for hot showers. Once they thawed out, the group enjoyed a warm beverage and a meal at the Legion. Many agreed that this was an energizing way to kick of a new year, and a great way to support the United Way in their efforts to meet the needs in the community. Approximately $7,200 was raised in support of the United Way!

About the United Way Campaign

The staff and more than 1,000 local volunteers of the United Way Durham Region commit themselves to be in touch with and identify the ever changing locally based needs of the communities of Oshawa, Whitby, Clarington, Ajax, Pickering, Uxbridge, Brock and Scugog Townships, and surrounding communities. The United Way along with thousands of donors help raise funds to support more than 40 local social service organizations; these agencies provide approximately 200 programs which bring support and assistance to more than 80,000 people locally.

The Elgin Polar Plunge is just one of many events that support the United Way Campaign. This was the second year for the Elgin Pond Polar Plunge, and approximately $7,200 was raised. Last year, the event raised $8,500.00 which was distributed among a number of local organizations such as Big Brothers, Big Sisters, Precious Minds, Community Care, and Community Living.

The United Way is making a difference in our community by helping the less advantaged in these challenging times, and is quoted as saying that “if you wish to help those less fortunate in this community, and in so doing help make this a better place in which to work, raise a family, live or play, then there is no better way to do it than with the United Way.”

Many thanks to those who helped Alan and the Upright Team raise funds for this worthy cause! Will we see any of you at next year’s Elgin Pond Polar Plunge?